(This add-on is part of the Rise of the Tomb Raider Season Pass and can also be purchased separately through the Xbox Live Marketplace or Steam. The 20 Year Celebration Edition includes this DLC by default.)

In Endurance Mode, Lara explores the Siberian Wilderness in search of artifacts after her transportation breaks down. Having to endure against the extreme cold, Lara must forage for food, resources, and fire in order to survive. While exploring, the map is procedurally generated from a series of tiles that include a variety of forest, building, and crypt set pieces. Resources, traps, artifacts, animals, and enemy NPCs are all spawned randomly. Lara must find artifacts and signal for pickup from the wilds before she dies. The more artifacts she gets, the higher the score. However, if Lara dies before lighting a signal fire, the points from the artifacts aren’t included in the final score.

The following systems are unique to the Endurance Mode.

Endurance Mode will always start during the day. As Lara explores the area, the time of day will gradually change from day to night to day. The process will continue to repeat until the player dies or successfully extracts from this zone.

Being in a Siberian environment, Lara must survive against the cold and ensure she doesn’t freeze to death. While she’s exploring, her warmth meter will continually drain while Lara is not near a source of warmth. Activities like swimming in water will speed up the rate at which she loses heat, while sprinting or taking shelter inside caves and buildings will slow down heat loss.

Lara can replenish her warmth meter by interacting with the following heat sources:

Base camps requires 5 hardwood in order to light. Burn barrels are only found at trinity camp sites and are always on. Lanterns can be found placed near camps as well.

When Lara is freezing, an animation of her stumbling will play, Lara will be unable to sprint, and an FX overlay will be added to the screen. In addition, Lara will take damage over time causing her to die within 3 minutes, assuming she takes no damage from other sources.

As Lara explores, she will grow hungry. Under normal circumstances, it will take 5 minutes for Lara’s hunger meter to go from full to critical. The more she exerts herself, the quicker the meter will run out. She can replenish the meter by hunting animals or foraging food. If Lara’s hunger meter drops to 0, it will go critical and start flashing. When this happens, Lara will be starving and start to take damage over time. If Lara does not get food, she will die from starvation in about 5 minutes, assuming she takes no damage from other sources.

Lara has the ability to store food when she’s full. This will fill the bar on the right side of the hunger meter. If Lara has any food stored, the meter will be drained before her hunger meter starts to drop.

Lara starts off with only her recurve bow. As she explores the world, she will add to her arsenal by looting the bodies of dead NPCs and opening strongboxes. When a new weapon is obtained, it will replace an existing weapon in that slot or add to it if one is not already unlocked.

The only exception to the weapon procurement is the Guiding Light bow. To obtain this weapon, Lara must open 4 sarcophagi that randomly spawn inside the crypts.

There are 3 types of traps Lara has to deal with inside a crypt; spike traps, ankle snares, and spike pits. Spike traps can be set off by projectile weapons or when Lara steps onto the trigger plate. If Lara triggers them by stepping onto the plate, she will enter a slow-motion reaction phase where she has to shoot and destroy the trap before it impales her. Ankle snares will cause damage over time to Lara until she pries free of them. Spike pits are easily avoidable but cause instant death if Lara doesn’t escape their crumbling cover quickly enough.

Crypts are the primary source of artifacts in Endurance. Inside each crypt Lara is guaranteed to find 1 codex or sarcophagus at the end and up to 5 artifact boxes. Opening a codex gives Lara an artifact and one of the codex skills in the chart below. A sarcophagus will give Lara an artifact and 1 piece of the Guiding Light bow. If Lara opens 4 sarcophagi during an Endurance run, she'll unlock the Guiding Light bow.

The exact contents of the crypt are chosen randomly each time the mode is played. This applies to both the traps and rewards. Lara will always be guaranteed a codex or sarcophagus, but she can find anywhere from 0 to 5 of the small artifact boxes. The configurations of traps are also selected randomly.

When a unit is spawned, the amount of resources is randomly determined from a min and max range, then placed on random spawn points designated for each resource type. Lara uses these resources to craft ammo, bandages, light campsites, and upgrade her weapons and gear.

When Lara is ready for extraction, she must locate and use resources to light a bonfire. When lit, a helicopter will arrive to pick Lara up. There is a chance that NPCs will see the smoke as well and attack Lara. If this happens, the helicopter will delay its arrival or wait for the NPCs to be defeated. It is possible to be extracted from the area while NPCs are still alive. When the helicopter arrives, Lara must reach the rope and interact with it to trigger the extraction. 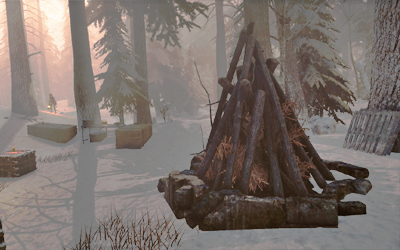 Endurance introduces some new UI mechanics and updated takes on existing ones found in other gameplay modes.

In Endurance, Lara earns experience at a faster rate allowing her to purchase several skills while she explores the Siberian Wilderness. Killing enemies, hunting animals, surviving traps, and opening strongboxes. In addition Lara will level up for each day she survives in the wilderness. All tiers of the skill tree are unlocked from the start, allowing Lara to purchase any skill she wants. Some skills are still gated by weapon requirements or lower tiered versions. 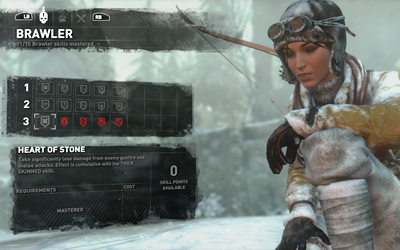 The histogram is visible in 2 places, on the Expedition’s mode selection screen for Endurance when the focus is not on the mode, and on the status screen while playing Endurance. On either screen you can switch between the 2 different histograms, Days Survived and Artifacts Collected. While on the Expeditions selection screen, the histogram will show you your best score which is stored on the leaderboards. The values are pulled from this record, they are not independent. 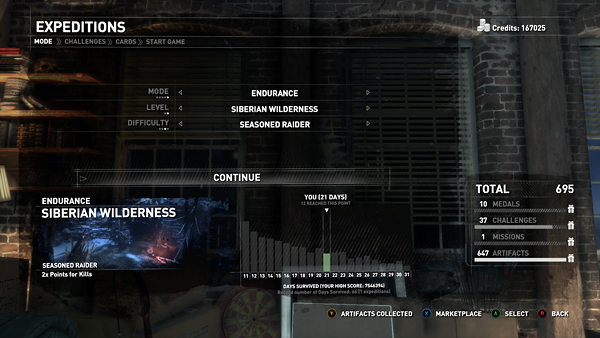 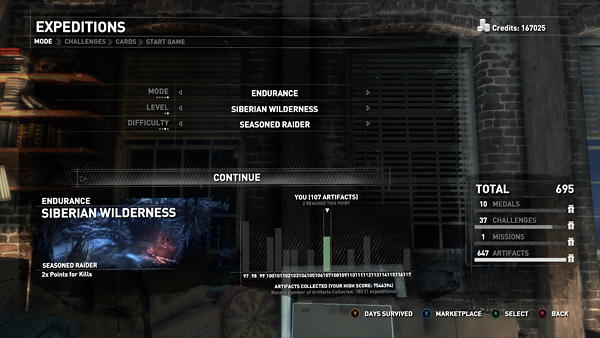 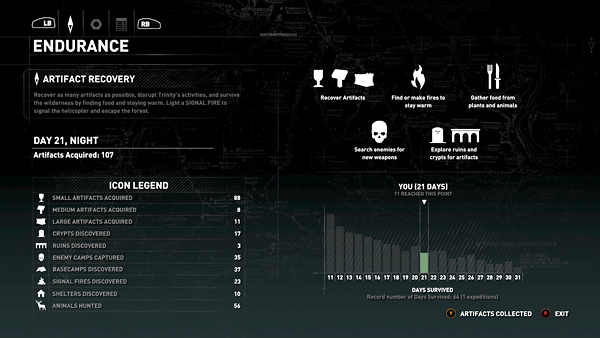 Under Expeditions, Lara can track the overall time spent exploring, how many days she’s survived, how many kills, headshots, melee kills, stealth kills, environment kills, and animal kills she’s made. She can also track her best kill streak and stealth kill streak as well as her overall score – excluding card bonuses. Any active cards are displayed here and pressing X can bring up the active challenges. 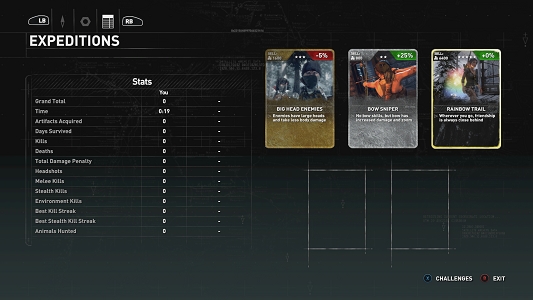 The Endurance run ends either when Lara meets her demise or when she is successfully extracted from the wilderness. Upon doing so, the score for the run is tallied and the overall results are displayed. There’s a bonus for surviving the expedition and escaping successfully, as well as the points for the artifacts collected. If Lara dies, then the score will not include the artifacts gathered. 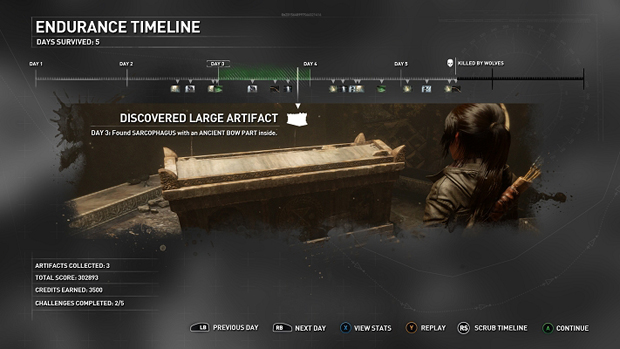 Like other replay modes, the following mechanics can influence the gameplay during Endurance Mode.

Prior to starting an Endurance level, the player can select up to 5 challenges to complete while searching for artifacts. Each challenge will award credits upon completion, regardless of whether you survive the round or not.

Cards can be used to modify the Endurance experience. 5 cards can be used to give Lara starting weapons, outfits with skills, modifier cards to make combat easier or harder. Each card has a bonus multiplier on it that will apply to the final score earned.

A pack of Endurance specific cards will be gifted upon the purchase of the DLC. These cards are all foil versions, cannot be sold, and are only available for use in Endurance Mode. A new category will be available when selecting cards that only contains these. That’s the only category they will appear in. 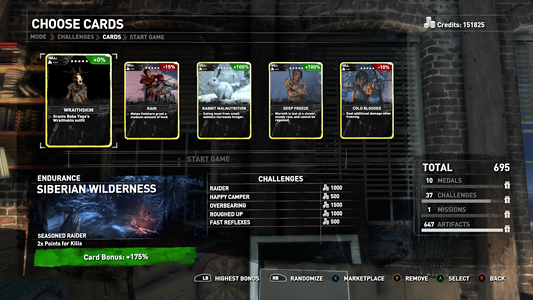 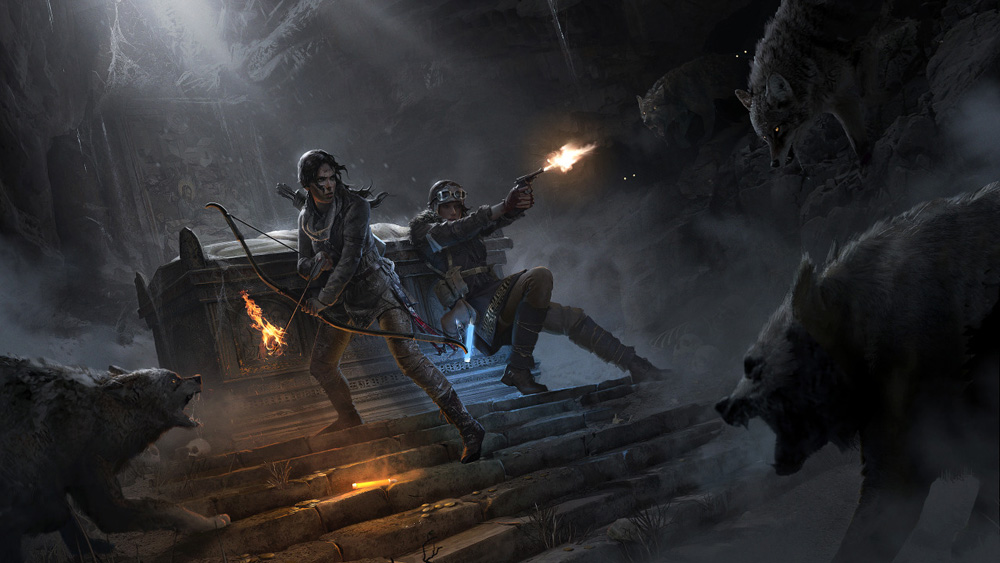