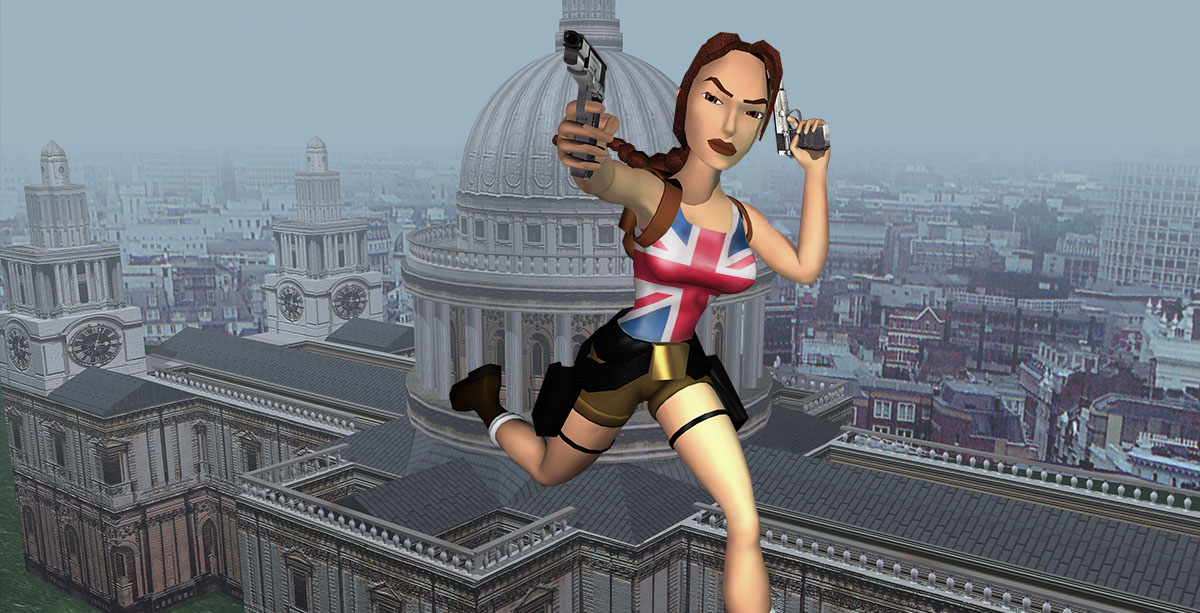 When Nathan McCree, composer of Tomb Raider I, II and III announced his return our team was mildly shocked since it was revealed: his art is going live as a symphonic concert in London. That was the exact moment when we knew we HAD to be there. Hereby you can read our travelogue...

As weeks passed by we got more and more informed about the event. We bought our tickets as soon as they became available – followed by plane tickets and hotel reservations to keep ourselves organized and avoid the stress as much as possible. Time flew away so fast that we noticed it's mid-December already and it's time to explore London – not to mention the Tomb Raider show itself.

The Tomb Raider Tour in London 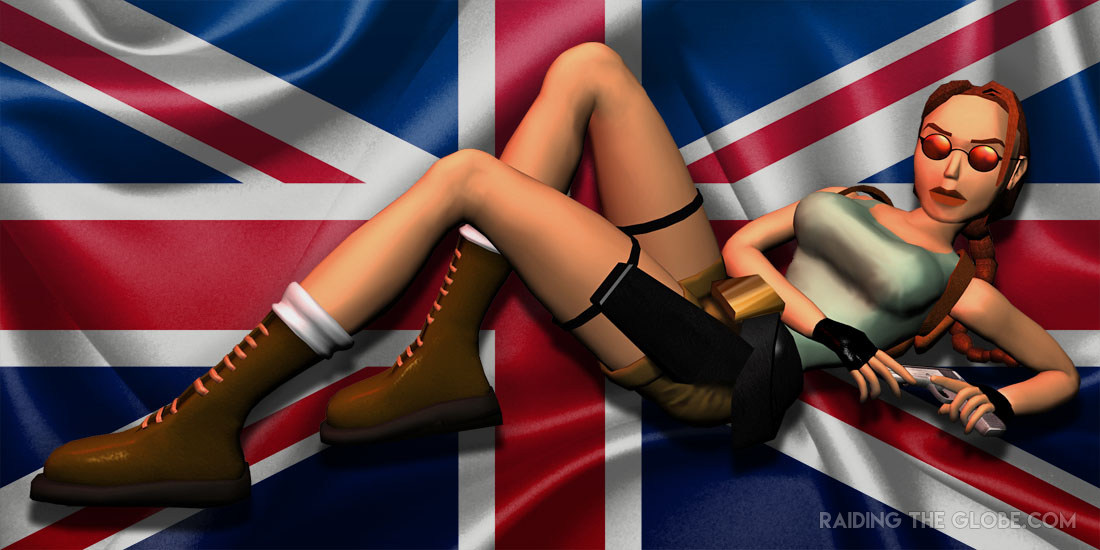 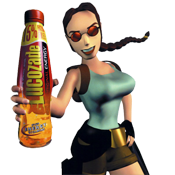 After landing we rushed to Downtown and stopped by a store to buy Lucozade – the typical British energy drink which was advertised with Lara Croft between 1998-2003. It was really helpful chasing our fatigue away. Tomb Raider III's Aldwych came to life as we travelled underground. Our destination was the London Tower: we had an international group for months by then, with all the fans attending to organize the weekend and meet friends during the show. They came from all over the world, literally. Some of us knew each other online and those friendships became strong bonds over those days. Lucky us, Meagan Marie, Senior Community Manager at Crystal Dynamics and author of "20 Years of Tomb Raider" joined us, too (as a tourist guide). 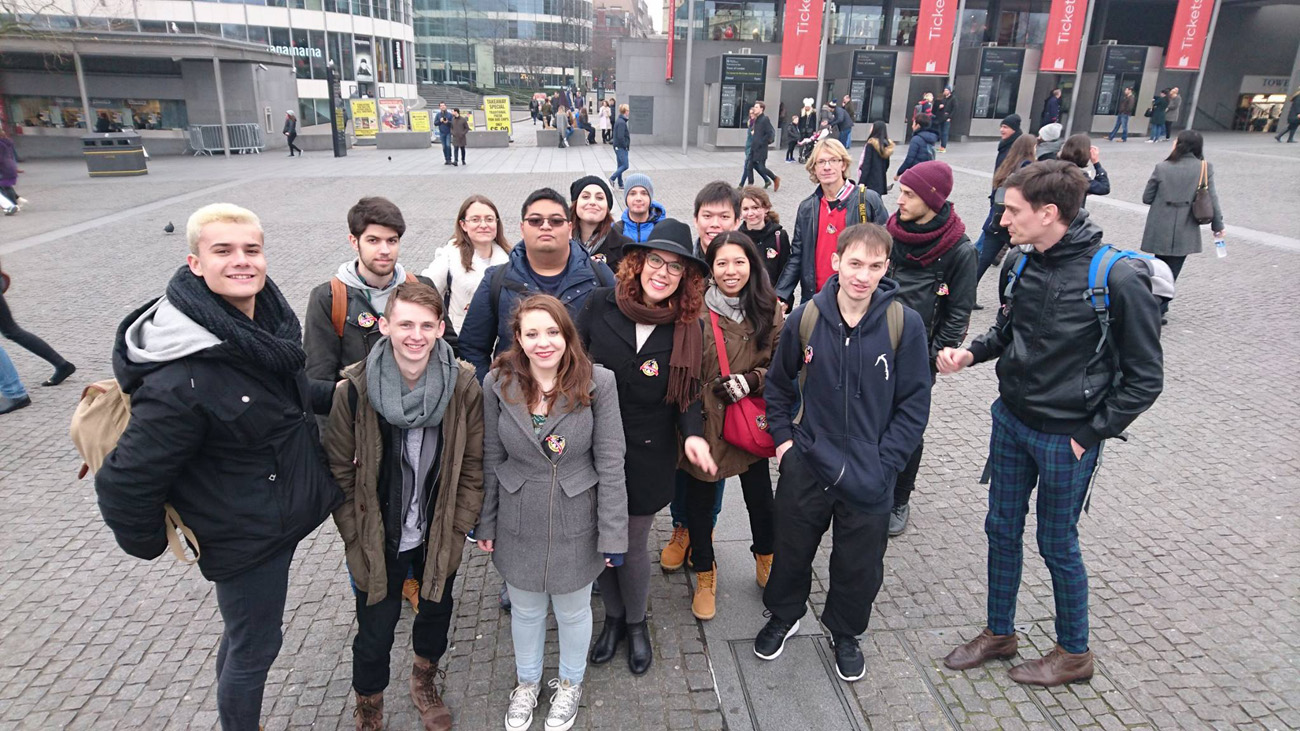 London Tower was followed by iconic Tower Bridge and we had a blast with all the community during our journey over river Thames. It was great for a sightseeing, however, our main destination was St. Paul's Cathedral, which can be seen on the cover of Tomb Raider III: Adventures of Lara Croft and in the level named "Thames Warf", featured in the same game. It’s probably impossible to explain what runs through a Tomb Raider fan’s soul upon seeing something like this. Most of us discovered the interiors of the cathedral on a guided tour... and some of us sneaked in smarter than Lara would have. 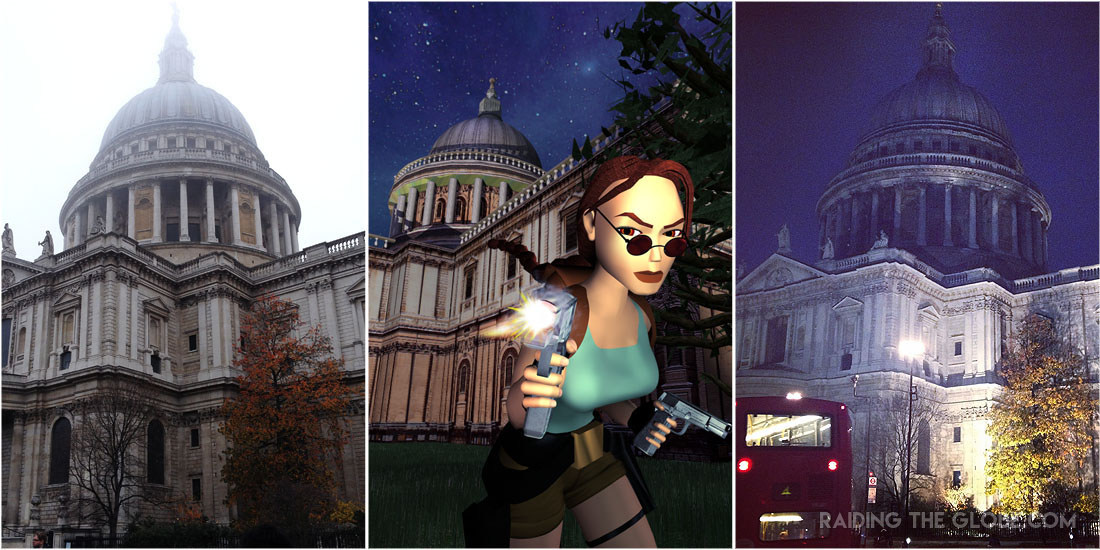 The sun had already set when everyone made it outside and newcomers joined the tour as well. Together, we headed to spectacular Big Ben then we had an abundant dinner while discussing more serious topics related to the games and recent events.

The community packed the whole weekend with programmes and the day of the concert wasn't an exception. We separated by interests: some of us had an adventure in British Museum while others went on to discover London. 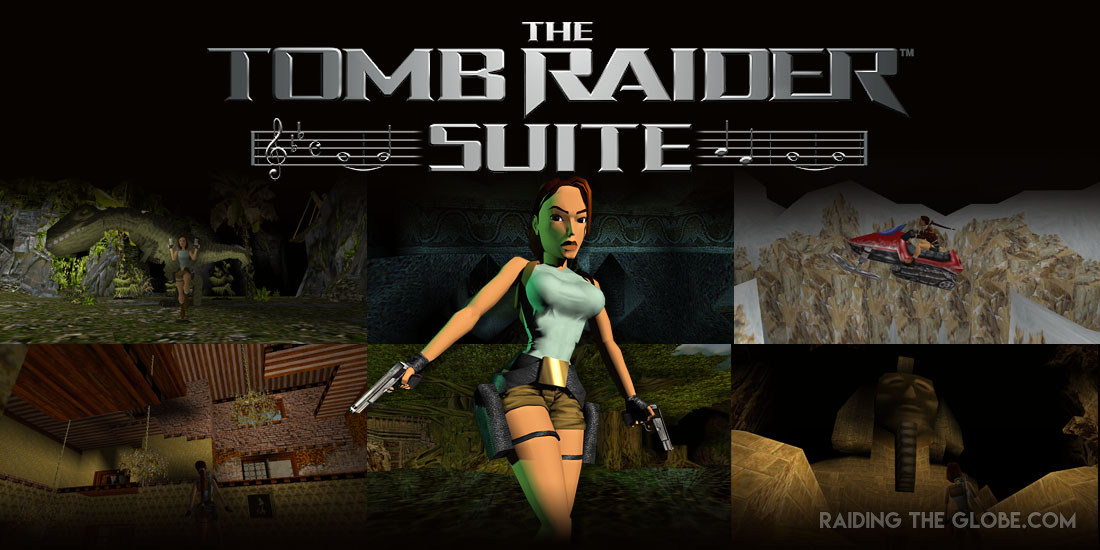 At last, the event that was constantly on our minds since April has arrived. The venue was Hammersmith Apollo Theatre. Before they opened the gates we met two people of our main community and we shared the excitement. Inside the guests could buy the programme and two types of Tomb Raider Concert-themed posters. And then, all of a sudden four living legends appeared, a part of the original Core Design team: Peter Barnard (Cinematic Artist, Tomb Raider I – IV), Gavin Rummery (Programmer for Tomb Raider I, II & The Angel of Darkness / Head of Core Design), Heather Gibson (Level Designer, Tomb Raider I & II) and Martin Gibbins (Programmer for Tomb Raider III, Lost Artefact, Tomb Raider IV: The Last Revelation and Tomb Raider V: Chronicles). It was a honor meeting them and getting their signatures. Luckily we have a photo with three of them: 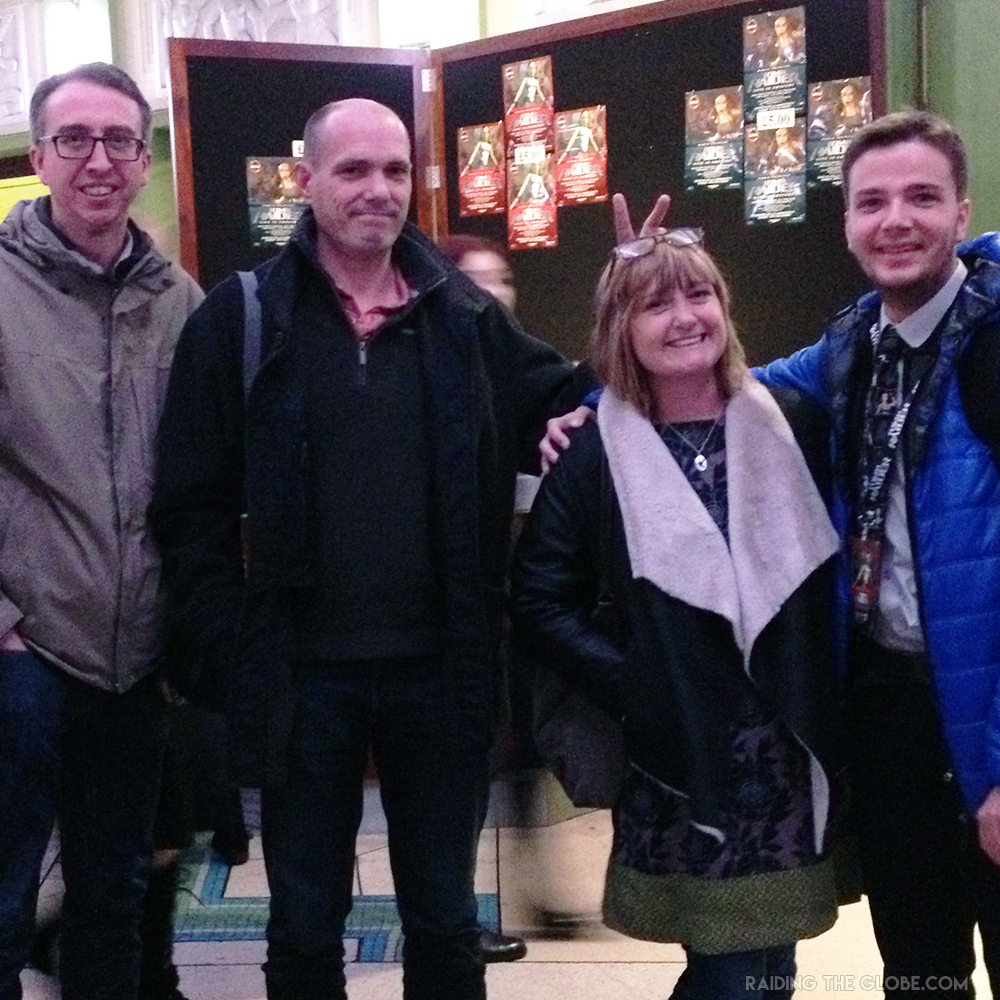 The hype was overwhelming when we walked in to find our seats, seeing smiling acquaintances all around. Before the show the staff warmed up the audience with the evening’s brightest star, Nathan McCree. He answered the interviewer's and the guests' questions helping us to have a full picture about why and how it was made.

The compere was Shelley Blond, original voice actress of Lara Croft, known from Tomb Raider I. The music was performed by conductor Robert Ziegler and the Royal Philharmonic Orchestra.

The intro was a mixture of "Anyone There" and "The Temple of Xian". The display was darkened while we could hear our own heartbeat. The structure of melodies followed the sequence of the games. Extended tunes of Tomb Raider I were performed first accompanied by screenshots of the game.

Tomb Raider II’s part was organized pretty much the same: original but extended tunes with screenshots on screen.

Suddenly Winston appeared offering tea to Shelley. After laughing at her annoyance a brand new piece of Tomb Raider music has been introduced, titled "Precious Moments".

After a break Meagan Marie announced the winners of her contest – it was a raffle with the seats, actually. The lucky winners received a gift pack containing "20 Years of Tomb Raider" and "Tomb Raider Archives Volume 1".

The show was continued with the music compilation of Tomb Raider III and the usual screenshots of the game.

Another surprisingly new piece of art followed the well-known melodies: it was named "In the Blood".

The next moment the all audience were laughing when a youtuber named Geeketiquette was highlighted because of her amusing commentary about the first Tomb Raider's music and her adorable humming along her gameplay.

The evening was closed by three medleys – video compilations of the three main episodes, synchronised with the highlights of The Tomb Raider Suite.

This event was absolutely flawless, almost none of us could make it to the end without tears. We can't thank the community enough for making this possible. And we are really grateful to the show's staff deciding on our team to provide screenshots and gameplay video content.

After the performance Nathan McCree, Shelley Blond and Meagan Marie welcomed fans who wished to request their autographs. An after-party closed up the event. 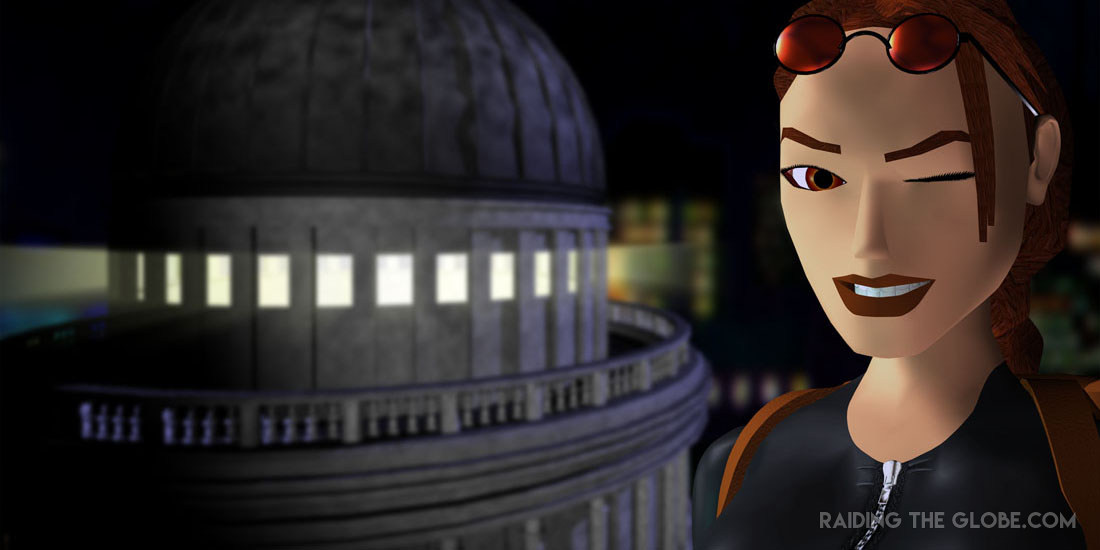 Probably this wasn’t the last live performance: they are planning a world tour and the music CD (The Tomb Raider Suite) is upcoming in 2017 as well. The works are destined to be finished in Abbey Road Studios.

After a refreshing sleep we continued the sightseeing in London. We visited Piccadilly Circus, the London Dungeon and the London Eye of course – where we had the oppurtunity to meet Angelina Jolie's lifelike replica.

At the end of the day we boarded the plane home filled with heartwarming memories. We would like to thank all of you, who were there and made our weekend so awesome. You are the best! View from the Thames Zsuzsi and the Poster