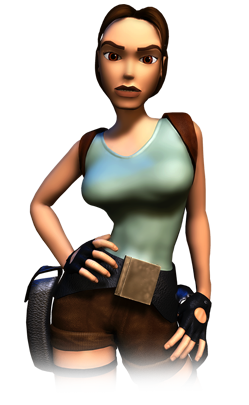 Not much of a team player. Discovered rock climbing while at Gordonstoun and used to set off into the hills alone during netball practice.

Also took up shooting as an extra-curricular activity but was instantly banned for showing 'too keen an interest'. However, the strength that climbing gave her fingers was to become useful when she started pulling triggers for real.

The daughter of Lord Henshingly Croft, Lara was brought up in the secure world of aristocracy - surrounded by tennis, butlers and corgis. But this all started to change when she went to the renowned school of Gordonstoun and found the mountains of Scotland.

Having attended Wimbledon High School for Girls from the age of 11 years, Lara's parents decided that now she was 16, she should broaden her education by studying for her A' levels at one of England's most prominent boarding schools. Whilst her academic achievements were outstanding, a number of comments on her term reports indicated that she could perhaps benefit from a more structured lifestyle in order to keep her somewhat impulsive nature firmly in hand...

Lara was independent and outgoing at school always preferring individual to team sports. Whilst at Gordonstoun she excelled at rock climbing, canoeing, horse riding and archery. A natural athlete she discovered a passion for firearms as an extra-curricula activity but was "discouraged" by the school authorities. Later, in her Swiss finishing school, she developed her interest in firearms by charming her way onto the Swiss Armed Forces training range where she proved to be a natural and qualified marksman class. Later in life she felt drawn to fast vehicles and any form of extreme sports, "just to keep me in trim".

Upon her return on one such occasion, Lara heard her parents deep in conversation. Concerned that their daughter's vacation was being spent in a less than structured manner, they were discussing the merits of a trip to Europe. Lara would be sent off with her Aunt, a local school teacher, to be educated about European history. Not only would she broaden her horizons via travel, but would surely benefit from a first-hand experience of Europe's main sites of historical interest.

Whilst Lara felt excitement at the prospect of foreign travel, the thought of being accompanied by her stuffy Aunt soon deadened her interest. The idea of being chaperoned, lectured and disciplined 24 hours a day filled her with horror. 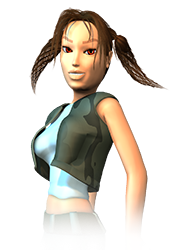 As she lingered by the door, she chanced across a copy of National Geographic on the hall table. The front cover featured a familiar name - Professor Werner Von Croy. A respected archaeologist, Von Croy had once lectured at Lara's school to pupils and parents alike. The experience had a profound effect on Lara, triggering a desire for travel to remote locations in search of adventure. In some ways Von Croy had become an inspirational figure for Lara - the memories he had recounted came flooding back as if she had been there herself, rekindling her desire to experience the rewards of discovery firsthand.

Perhaps Lara's restless nature and desire for adventure was inherited from her father. He had made a point of attending the lecture since he had often visited archaeological digs in places such as Jordan, Egypt and South America in his youth. Although he had little time to read these days, he still subscribed to archaeological journals and on the odd occasion when he had time to spend with Lara, she would listen, totally captivated, as he recounted his experiences.

As Lara read further, she learned that Von Croy was currently preparing for an archaeological tour across Asia, culminating in a potential new discovery to be made in Cambodia. With limited finances, he would travel alone, possibly hire cheap local help along the way. Already having researched extensively, and planning to do more whilst in Asia, Lara could already see the promise of discovery shining in his blue eyes as they stared out at her from the page.

Unable to contain herself, Lara burst in to the room, thrust the article in front of her parents and without hesitation demanded she accompagny Von Croy on his expedition, rather than visit Europe's already well-documented and seemingly bland remains. Laughter ensued as neither parent took the idea seriously, but as she argued her case it became more plausible that the experience might well stand Lara in good stead for a future studying history. She may even pursue a career in teaching, just like her Aunt. After his own experiences, Lord Croft could hardly disagree that travel was an education in itself.

Familiar with Von Croy's respected standing and reputation for carefully planned expeditions, Lara's father found himself struggling to argue against her intelligent reasoning and resourceful nature. She was after all, almost an adult - a mature teenager at least. Her fearless approach to tree-climbing, physical agility and general tomboy antics left him with little doubt that she was physically capable.

As Lara argued the case further, he found himself walking over to the desk and penning a letter to Von Croy, introducing himself as an influential society figure and offering financial assistance in exchange for his daughter's place on the expedition.

Von Croy's reply assured the Henshingly Crofts that the territories were friendly and that he had ample experience to look after both his and Lara's well being. Lara's company as an assistant would be welcome, as was the offer of such a generous cheque. He remembered Lara from his lecture - her incessant yet insightful questions had made quite an impression upon him. He was also impressed by the young Amazon's enthusiasm and energy. She could obviously take care of herself and the experience would be a unique educational opportunity. This set the pattern for the rest of her life.

Lara's mother, for one, secretly welcomed the fact that her daughter's whereabouts could now be the responsibility of somebody else, leaving her free to organise charity events without distraction. And so it was agreed by all that Lara would accompagny Von Croy for the duration of the tour, Lara however was destined to return alone... For the first time she experienced the hazards and mysteries of the ancient world of antiquities. Terrifying dangers became an accepted part of her life then on.

Later, at her Swiss finishing school, she developed her interest in firearms by charming her way onto the Swiss Armed Forces training range where she proved to be a natural and qualified marksman class. Later in life she felt drawn to fast vehicles and any form of extreme sports, "just to keep me in trim". She took to the art of extreme skiing and spent a holiday in the Himalayas searching for more challenging terrain. On her return trip however, the plane crashed deep within the mountains and Lara was the only survivor.

Unable to stand the suffocating atmosphere of upper-class British society any longer, she realised she was only truly alive when she was travelling alone. 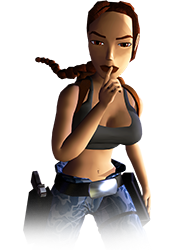 Despite this drastic life change, Lara still retains the essence of her upbringing - most notably with her polite, upper-class accent.

Lara's parents though, having sported hopes of her marrying the Earl of Farringdon, were less than convinced about this chosen lifestyle and ceased to associate with their daughter - even terminating her monthly allowance. The Earl is still waiting.

While in England, Lara lives in a mansion in Surrey which she inherited many years ago and where she lives the same way she prefers to work - alone. At one time she saw little use in it but now realises that, if nothing else, it is at least handy for storing all the artifacts she has acquired on her travels in the huge rooms of the mansion. She has also had a custom-built assault course constructed in the grounds and shooting range for training purposes. With her unique physical abilities, Lara is certain of being able to break many world athletic records but see no challenge in this for herself. It lacks the necessary ingredient of danger. There is also adequate space her favorite vehicles. Anything on two wheels over 650 cc's is considered acceptable but she finds both the Triumph Speed Triple and the Harley V-Rod especially attractive.

Lara doesn't consider tomb raiding as a job, merely a way of life - although she has been known to uncover archeological artifacts on commission.

To fund her radical lifestyle, Lara writes travel books. Titles so far have included 'A Tyrannosaurus is jawing at my head' and 'Slaying Bigfoot'. Her common complaint though is that she doesn't have enough time to put pen to paper.

As well as uncovering many notorious archeological sites - including the Atlantean pyramid and the last resting place of the dagger of Xian, Lara has found fame in other areas... she has driven the dangerous Alaskan Highway from Tierra del Fuego in South America in record time. This little escapade resulted in worldwide headlines confirming the opinion of the established Antiquities community that she was a lose cannon (although this record was later denounced by the Guinness Book of Records due to her 'reckless driving') and she hit the headlines again when she hunted out and killed Bigfoot in North America. She loves this profile but generally shuns the media spotlight as it interferes with her Tomb Raiding activities.

Lara was brought up to appreciate classical music but having been a guest on U2's Popmart tour, has since become a fan of their 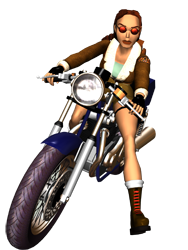 music. She has also been introduced to the sounds of Nine inch Nails by her Aunty and considers it 'good easy listening'. Finds trance music, in general, good for training.

Despite being a proficient cook from her days at finishing school and having sampled most of the exotic delicacies of the world, Lara usually opts for beans on toast when at home.

Any challenging sports. Has a particular interest in experimenting with different, often extreme forms of transport.

Has also once admitted to stitching a kind of Bayeaux tapestry of her own adventures while at home.

With her unique physical abilities, Lara is certain of being able to break many world athletic records and so sees no challenge in this herself. Her main ambitions still lie in he undefined world of tombs and the past.

She has also however, developed a personal regard for Brian Blessed's attempts to climb Everest. If he ever succeeds, she is determined to piggy-back him up there. 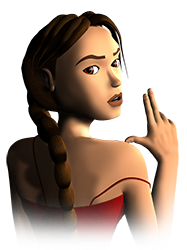 All the great ancient figures who respected themselves enough to design such intricate tombs to be buried in.'Nobody goes to trouble like that anymore...'

Any gun at hand.

Her Aunty's corgi which has bitten her on several occasions - about which, for once, there is little she can do.