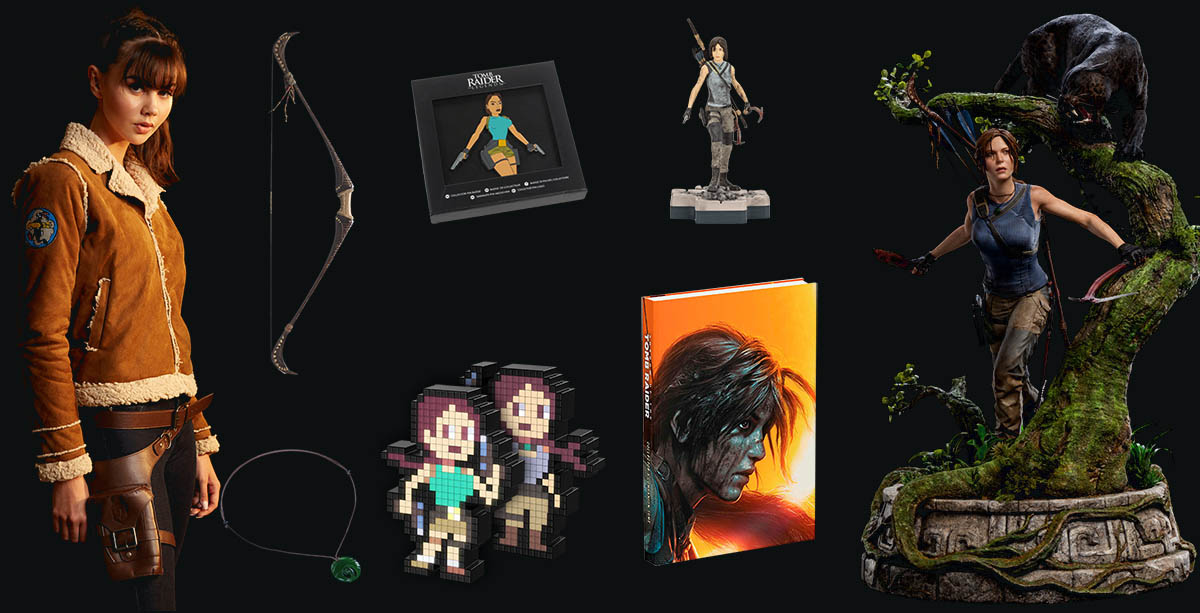 Raiders, rejoice! New official merchandise for Shadow of the Tomb Raider and classic/original Tomb Raider games has been revealed! If you are looking for new Lara Croft figures, statues, books, replicas, pins, new women's clothing line or other goodies into your collection, these products should make you smile. :)

Weta Workshop concept designer Daniel Falconer was charged with reimaging this scene from Shadow of the Tomb Raider. His design was then transformed into 1:4 scale polystone by sculptor Daniel Cockersell, who worked digitally in Zbrush to immortalise Lara Croft as a collectible figure. A Limited Edition piece of just 750, Lara Croft was developed by the same Weta Workshop artists and technicians who work on their film projects.

The Necklace of Lara Croft is a prop replica of the original piece of jewellery featured in Shadow of the Tomb Raider. Crafted to exacting detail, the necklace is made from jade and sculpted by local pounamu carver, Terence Turner, in Wellington, New Zealand. The necklace comes in a beautiful gift box made from natural timber.

As versatile as it is deadly, Lara uses her bow and arrow to hunt prey and protect herself from animals and enemies alike.

This non-functional prop replica has been created from designs featured in Shadow of the Tomb Raider, using high impact urethane material and finished using techniques and materials to achieve the same battle-worn look it has in the game.

Display your bow and arrow in pride of place on your wall, mounted on the accompanying wall plaque complete with Mayan inscriptions (not photographed). Or take your Cosplay to the next level and strike fear in the hearts of your enemies.

Totaku Lara Croft Figurine (at close to 4 inches tall, number 30 in the series).

Numskull Designs' range of official Tomb Raider merchandise – from mugs, hoodies, and hats, to PS1 coasters, candles, pin badges, and more, they have plenty of artefacts for you to discover, whether you're a fan of classic or modern Lara Croft!

Go Beyond Strategy - Immerse yourself in Lara's world with this Collector's Companion Tome from Prima Games through 336 pages!

The Shadow of The Tomb Raider Official Art Book features exclusive concept art and developer interviews detailing the climactic conclusion of Lara Croft’s origin story where she will experience her defining moment in becoming the Tomb Raider.
(192 pages, hardback.)

Shadow of the Tomb Raider - Path of the Apocalypse (Titan Books)

In a brand-new adventure, Lara Croft must evade the agents of Trinity and discover an ancient secret. When a mysterious stranger offers to help Lara uncover a clue that could give her the upper hand, she embarks on an expedition to a system of caves in Colombia. However, once they learn of Lara's plans, Trinity will stop at nothing to reach the location first. Trinity believes they can turn the tables on Lara, but in the darkness of the underground caverns, there are terrors in the depths that neither Lara nor Trinity anticipated. (320 pages, paperback.)

Featuring forty-five highly detailed, black-and-white images from fan favorite artists including Randy Green, Phillip Sevy, Tholia, and Katie Swindlehurst! Spanning the history of Lara Croft and her adventures, the official Tomb Raider Coloring Book is a must-have for all fans to add to their collection.

Shadow of the Tomb Raider Fashion Line (Her Universe)

Introducing the first gaming inspired collection from Her Universe, based on Shadow of the Tomb Raider. This collection was designed by Hannah Kent, one of the winners from the 2016 Her Universe Fashion Show.
The collection is available on HerUniverse.com and HotTopic.com. A free in-game code to unlock the White Shadow Band Resource Pack will be given with any purchase of $20 or more from the Her Universe Tomb Raider collection on HotTopic.com while supplies last.